Today,  the fates of  indigenous activists who were sanctioned for their leadership in the 2011 anti-mining protests in Puno region, Peru, have been decided. By the court’s ruling decision, 10 Aymara citizens have been acquitted for their involvement in organizing and leading a region-wide uprising—known as El Aymarazo— against the Santa Ana silver mining project operated by Vancouver-based Bear Creek Mining.

Only the movement’s widely-recognized leader, Walter Aduviri, stands convicted on a count of inspiring destruction of state and corporate property. (All defendants were acquitted of the charge of extortion.)  He left court in high spirits nonetheless, surrounded by loyal supporters who marched behind him through the urban center of Puno, the capital city of the region. 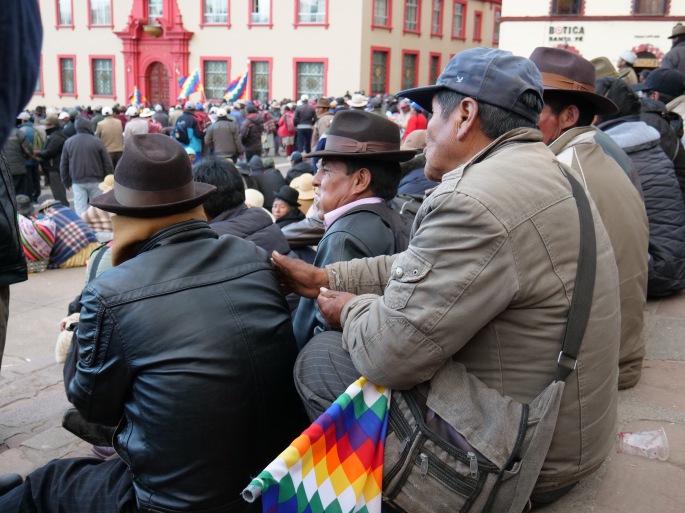 Aduviri faces the likelihood of seven years in prison and a fine of two million Peruvian Nuevo Soles (about $575,000 USD). His final sentencing is scheduled for July 18th, 2017, but today’s provisional sentencing carries heavy consequences for the political future of this region’s indigenous citizens.  As a result of the court’s decision, Aduviri, who held political ambitions for 2018 regional governance in Puno, may lose his lands and campaign financing in attempt to pay the exorbitant fees, and be ineligible for public service once his sentence is finalized. Aduviri runs on a stringently anti-mining campaign platform, and his political symbol, a blue gotita (droplet) of water with a winking face, is painted along myriad houses and community buildings all along the highway tracing the southern shores of Titicaca.

The politically-charged consequences of these financial sanctions have incensed many of Aduviri’s Aymara and Quechua supporters, who demonstrated en masse, braving the cold and waving wiphala flags in support of “Hermano Walter”. Discussion and planning is already underway for a new wave of Aymara protests, road blocks, and regional strikes, though citizens are awaiting the final sentencing in a few weeks. Just after the decision was announced, I raced north across the city the recording studio at Pachamama Radio with Aymara communicator and women’s rights activist Rosa Palomino. 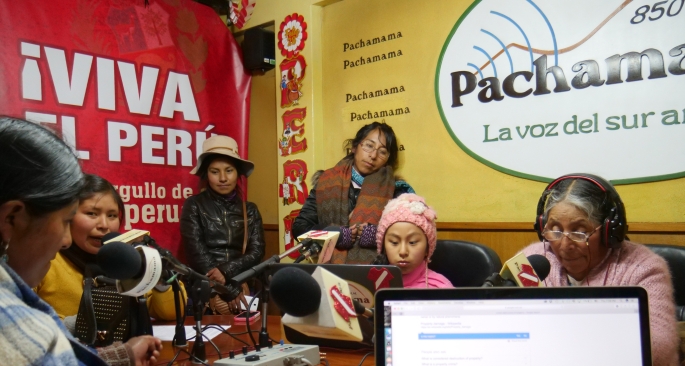 She and her communications team broadcasted their weekly Aymara language news and culture show, Wiñay Pankara (Always Blooming), with a focus on the day’s legal proceedings. On the air were Palomino and her associates from the Union of Aymara Women of Abya Yala, or UMA, and invited guest Lucio Ramos, a local yatiri, or Aymara spiritual leader and

educator, who encouraged listeners to take charge of their indigenous communities’ bienestar (wellbeing) and “train-up” to be indigenous sociologists, anthropologists, and community reporters. Central to the program’s discussion was the theme of representation; from the state’s refusal to address collective land rights issues, to the mainstream media’s avoidance of indigenous rights violations and neglect of Aymara perspectives on illegal land concessions and corporate manipulation of local governors.

The proposed Santa Ana mine at the center of today’s conflict is located in the Aymara village of Huacullani, an Andean community of the altiplano, the arid high-altitude plain that traverses the Peru-Bolivia border along the shores of Lake Titicaca. Back in 2011, the conflict over unwanted mining infiltration at Huacullani ignited the El Aymarazo uprising, which quickly spread to protests and demonstrations against various extraction projects throughout the region, all of which were operating against the United Nations’  ILO 169, which guarantees indigenous communities the right to free, prior, and informed consent on all extraction and development projects on their territories. It remains to be seen if a second wave of El Aymarazo will retain the same strength in numbers as the 2011 movement that successfully halted state and municipal roadways, and shut down the center of Puno for days on end. But after Thursday’s momentous court decision, across the radio fields of the altiplano, cries for a new “Quechuazo y Aymarazo” echoed into the night.